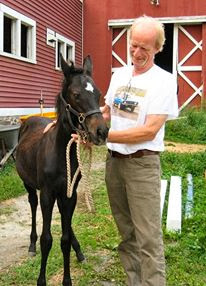 Although  the first time we saw Dinky, was at the fair; terribly hot, crabby and frightened, this is a picture of my husband with Dinky the day we adopted him. So thin and tiny it was enough to break your heart. It is beyond me why he was the last of this batch of nurse mare foals to be adopted or why no one seemed to want him. It was so obvious to us how badly he wanted a home and how afraid he was that he wouldn't find one. That day, he was not excited about leaving his safety net and best friend Lucky behind, even long enough for a picture. 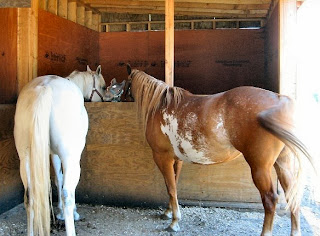 The first time Dinky met his new family, Chrome and Connella he was locked in his new stall.They were all so excited to meet each other. Yet, due to his small size it was several weeks before he was allowed to roam the field with the two of them.

It was many months before Dinky was strong and healthy enough to spend time by himself, but from the first he was curious about everything. Just as if he was a small child, constantly changing what he wanted to be from day to day.